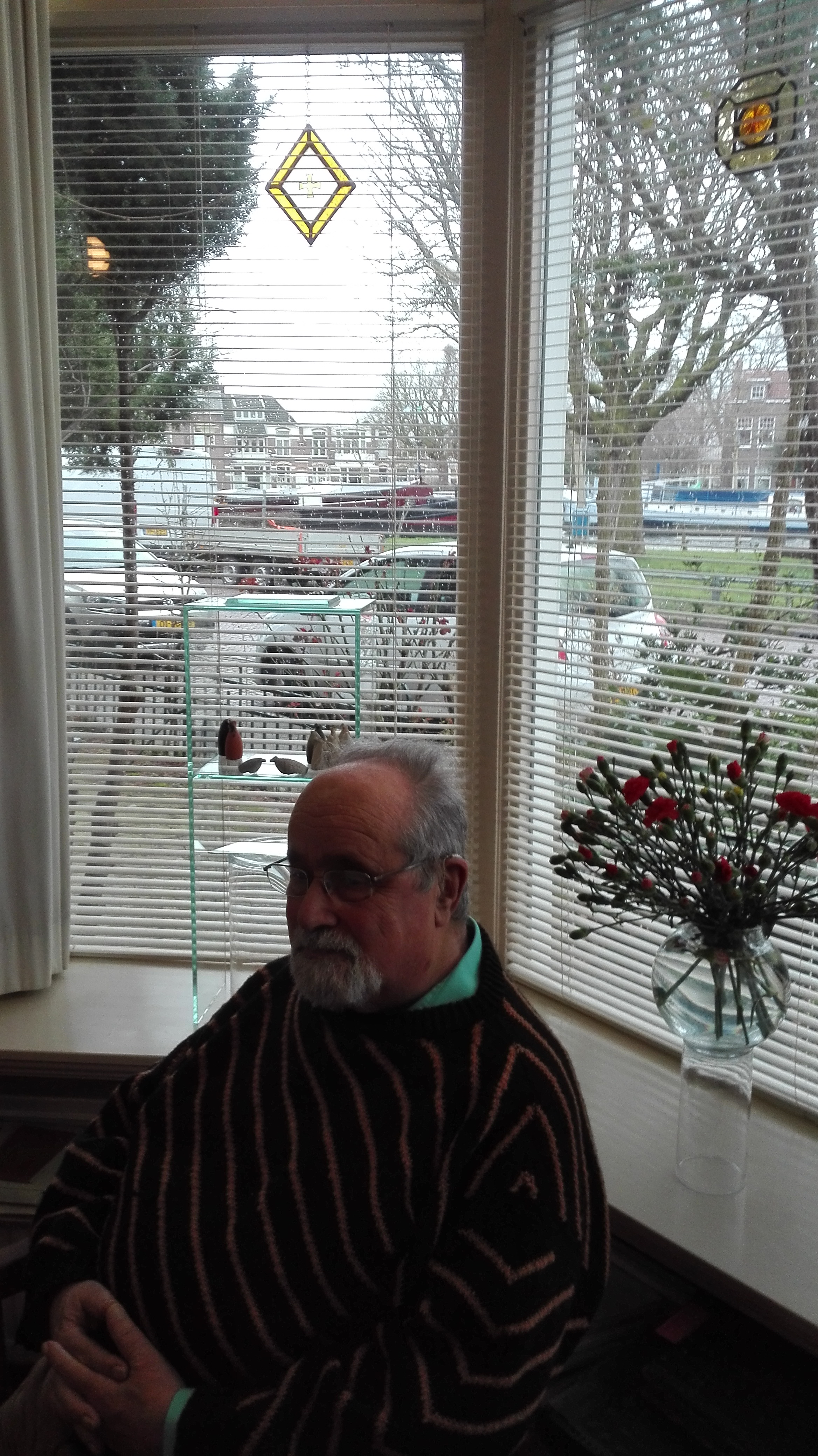 Lou Velleman gives us the story of himself and that of his family. Erfgoed Fundaasje (Heritage Foundation) is publicizing his story here and providing background information. Currently, (25th of march 2019) this is still in progress. We will publish the story in phases on this web-page as it becomes available. This is the beginning of the story.
Sjoch:
–Velleman kronyk
–Famylje-oersjoch Velleman

The name Velleman
There are six Jewish children born in the same year as me. That year was 1935. Of these children, I’m the only one who would survive the second world war. This is in thanks to the network of underground safe-houses. Our grandmother on my father side, my father, my mother and myself survive the war. The family on my mothers’ side in The Hague do not. The family of my grandmother on my fathers’ side – the Paisen family from Harns – for the most part, also don’t survive. I will give you a detailed report on this. First I’ll give you some information about the family of Velleman.

We derive our name from the name of our job. In Dutch, this now-defunct job was called ‘kattemeppen’. In previous centuries, the number of feral cats was excessive. These cats would steal anything they could. They were a plague. The people didn’t know how to cope with this. There was a need for someone to control the population of these cats. My ancestors saw this as an opportunity to make a living. They started in the profession of kattemeppen. This is the practice of killing the cat by clubbing it to death and skinning the cat for its pelt. The pelt would be sold. Our last name is a reference to this practice: Velleman. In Dutch this name translates as the man of skins.
Our father lived in a time where this practice was ending. At that time our family didn’t work in this profession anymore. He did work with the waste products derived from butchering though, but that was the extent of his involvement. As a child, after the war, I did know older farmers who had known of others who had been employed in the skinning of cats.

Not an eternal bachelor after all
Our great-great-grandfather Velleman emigrated in the 18th century from Germany to Leeuwarden in the Netherlands. At that time he already ceased to work as a ‘kattemepper’. At that time he already shifted to a profession as a small, self-employed tradesman. This Velleman was born approximately in 1768 in Lippstadt, present-day Germany. The first four years of the 19th century, the Velleman family still lived in Leeuwarden and then moved to Sneek. There, they lived for four generations as a small tradesman. For the most part in rags and scrap iron.

Grandfather Levi Velleman’s mother, Mietje Mendels, was such a tradesman. As a widow, she cared for four children and provides room and boarding for others. One of these is Salomon Blindeman. He is also employed as a tradesman in rags and scrap iron. A relationship develops between them and in time they are married. They have six more children, one of these dies at an early age. With this, the household grows in size to eleven. Grandfather Levi is an eternal bachelor and lives at his mother’s house. He is quite happy with this arrangement. His brothers and sisters have all long since left the family home and his stepfather has already passed away. When he is 43 his mother dies. He is now alone but isn’t up to the tasks of the chores in the house. He looks for a wife and marries half a year later. He marries Johanna Pais. She’s 28 years old at the time and comes from the town of Harns.

The business split
Trade has to expand. Grandfather Levi has no choice but to work as part of a new business. The eldest son from grandmothers second marriage – Machiel Blindeman – becomes the new tradesman. Grandfather isn’t as proficient a tradesman and prefers to let his half-brother handle this part of the job. In time Machiel’s son, Salomon, joins the business, as does our father. They join as assistants. Now there are two nephews – Salomon Machiel Blindeman and Salomon Velleman – with their fathers in the company. Machiel dies at this time. The brothers now have to run things together. Two opposite personalities, generally stated, accommodating and hard as nails. In no time at all conflict occurs.

Father leaves the company and strikes out on his own. Our father uses a ‘Skûtsje’ (small Dutch traditional vessels) to improve his trade. In the summer-time he rents out this vessel for leisure to his customers.  He adds cushions and mattresses for the customers comfort. This is a successful way of retaining his customers. At five years of age, I’m allowed to accompany our customers at fishing for eal. In this, I have an important function: to be on the lookout for the police.
Sometimes my father borrowed a ship from Johannes van Aalderen, who was nicknamed ‘Black Hannes’. He was a cousin of Red Hannes. They were nicknamed after their hair colours. Both of them were skippers of a Skûtsje. He starts out next to Jikke Ozinga’s hotel on Lemmerwei 8. It doesn’t take long for customers to transfer to my father. Particularly because uncle Sam Blindeman wasn’t the most customer-friendly man. He was smart, though. He was chairman of the Dutch Trading Company for a while, and he learned a whole speech in Thai once.

Sam and my father liked to have a bit of mischief when they were young. It was fashionable to wear these stiff collars for a while. They sometimes covered it in itching powder, put it on a dog and let him loose in the market, going wild.

During world war II
Later my father got a new warehouse at the Dryltserkade, because Jikke, the hotel owner, told him to find a new place. She was turning the side building in an auto repair shop. At this new place, he also collected old iron and copper. He could buy this warehouse because he sold his shares in the Dutch Royal Oil to Thom Zandstra. It was the beginning of world war II and as a jew, he didn’t want to keep them in his name, afraid they’d be confiscated. [Zandstra functioned as a ‘keeper’. A man who holds possessions of Jewish people during the war for safekeeping, so they won’t be taken by the Germans. After the war he returned the items to their rightful owners.]

Father had a company, Velleman’s rags and metal, before the war. At the beginning of the war, he sells al his stock and abolishes his company. He sets all the money he made from that aside. When you abolish a company, you get a state supervisor assigned to your case. Luckily, the man doesn’t notice father is hiding as much money as he can. He uses this money to hide several members of our family from the germans. He helped grandmother, my two uncles, aunt Wolf and her husband from The Hague and their child.

But in 1944 he ran out of money.  Through contacts within the underground resistance, he gets help from the government in London. This is among others set up by Walraven van Hall. [Financial aid for Jewish people in hiding, provided by the Nationaal Steunfonds] After the war father gets a tax assessment for 1942, 1943 and 1944. They say he used company money for private purposes. This is technically true, as he used the company as a cover to get enough money to hide his Jewish family from the germans. Tax inspector Wisselink refused to listen to the extenuating circumstances. Eventually, my father told him that if he was going to seize, he’d pay him the required money in cash; but he would make sure that every major news outlet would cover the exchange.
Inspector Wisselink gave in, but increased the tax bill for 1946 and 1947 to compensate. My father was quite angry about that, but let it go. He didn’t want to get Wisselink in trouble, because he did so much good during the war. The tax office was the centre of the resistance and Wisselink had helped them immensely.

After the war
Life continued, but things had changed. Old paper was suddenly worth a lot. So was rubber, old tires. The company thrived. Father employed 6 to 8 men. His younger brother Japie also joined the company. He calculated the wages and made sure all the employees were paid at the end of the week.

In the 70’s the market changes. Old clothes lose most of their value after the rise of both cotton and synthetic materials. The trade in old paper and metals is still thriving.